'The Outeniqua Basin offshore South Africa remains an under-explored, world-class hydrocarbon province. The Luiperd-1X well will test the eastern area of the Paddavissie Fairway on Block 11B/12B to follow-up on the Brulpadda discovery of gas condensate and light oil last year. In the success case, the joint venture plans to flow test the Luiperd-1X borehole by performing a drill stem test. We look forward to drilling results in the fourth quarter.'

Block 11B/12B is located in the Outeniqua Basin 175 kms off the southern coast of South Africa. The block covers an area of approx. 19,000 sq kms with water depths ranging from 200 to 1,800 meters. The Paddavissie Fairway is in the southwest area of the block and includes the Brulpadda discovery, which confirmed the petroleum system. The Luiperd Prospect is the second to be drilled in a series of five large submarine fan prospects with direct hydrocarbon indicators defined utilizing both 2D and 3D seismic data.

The Luiperd-1X exploration well is being drilled in 1,795 meters of water by the Odfjell Deepsea Stavanger semi-submersible rig to a total depth of 3,550 meters subsea. The well will test the oil and gas potential in a mid-Cretaceous aged deep marine sequence where fan sandstone systems are developed within combined stratigraphic/structural closure. Drilling and evaluation of the well is expected to be completed in the fourth quarter of 2020. 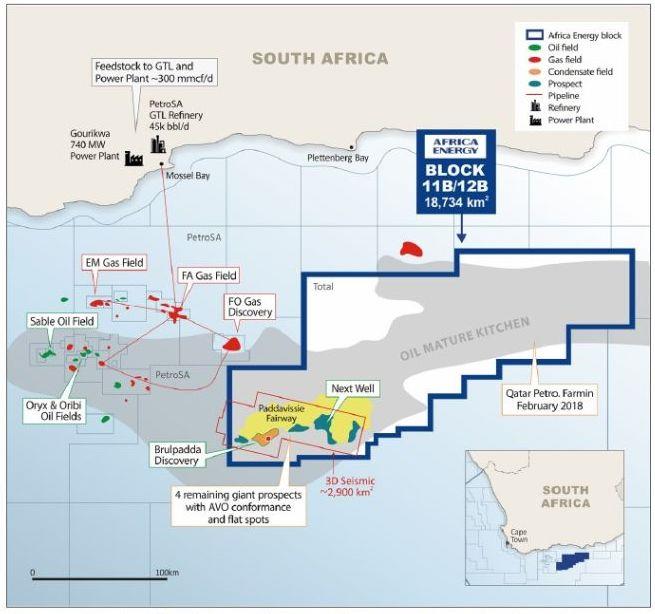