Total and Apache have made a material oil discovery with the Maka Central-1 well on Block 58 offshore Suriname, on trend with the prolific discoveries in the adjacent Stabroek block in Guyana.

The Maka Central-1 well was drilled by a water depth of about 1,000 meters and encountered more than 123 meters net pay of high-quality light oil and gas rich condensate net pay, in multiple stacked reservoirs in Upper Cretaceous Campanian and Santonian formations. Further drilling and testing will be carried out to appraise the resources and productivity of the reservoir.

'We are very pleased with this first significant oil discovery, made just after our entry into Block 58. The result is very encouraging and proves the extension of the prolific world-class Guyana Cretaceous oil play into Suriname waters,' said Kevin McLachlan, Senior Vice President Exploration at Total. 'We are optimistic about the large remaining potential of the area still to be discovered and will test several other prospects on the same block.' 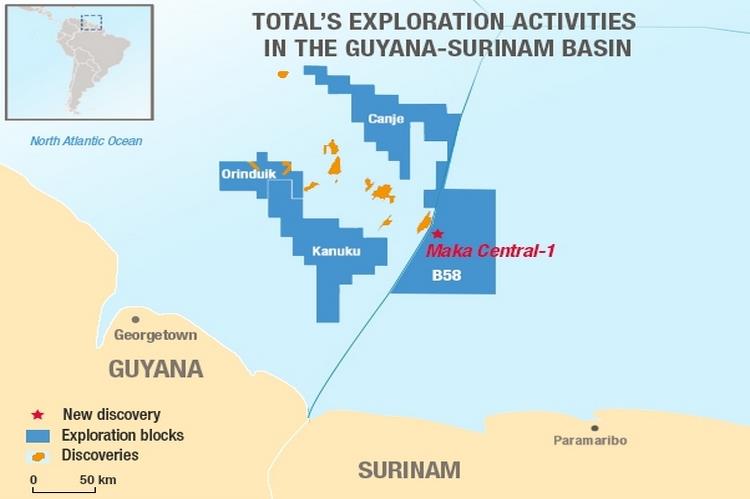 Note: Total announced December 23 it had signed an agreement with Apache Corp to acquire a 50 percent working interest and operatorship in the highly prospective Block 58 offshore Suriname, further expanding Total’s footprint in the prolific Guyana-Suriname basin.