Aminex has announced the completion of the Ruvuma farm-out. The Company, through its wholly owned subsidiary, Ndovu Resources, has transferred a 50% interest in, and operatorship of, the Ruvuma PSA to ARA Petroleum Tanzania ('APT'). 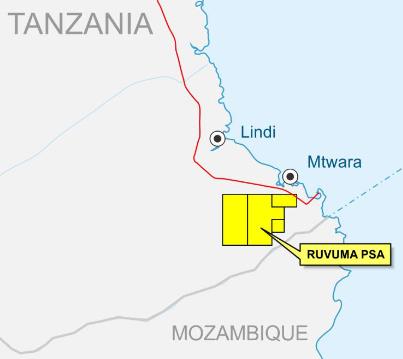 As previously announced, over the past c.12 months, the Company has borrowed US$3 million (the 'Advance') and US$2 million (the 'Loan') from ARA Petroleum ('ARA'), which has now been repaid to ARA by means of the US$5 million cash consideration payable to the Company on Completion of the farm-out.  The interest that had accrued on the Advance and the Loan has also been repaid from the interim period costs that are due to the Company under the Farm-Out Agreement.  Accordingly, the security over the Advance, the Loan and associated interest that was put in place by the Company in favour of ARA will now be released and discharged.

Following Completion, the Company now holds a 25% interest in the Ruvuma PSA with a full carry to potentially significant volumes of production. As previously announced, the Farm-Out includes a full carry for a minimum work programme including the drilling and testing of the Chikumbi-1 well, the acquisition of 3D seismic over a minimum of 200 km2 within the Ntorya area, and further production wells and infrastructure as required to propel the project to its estimated P50 production level of approx. 140 MMcf/d (gross project levels), as shown in an io Ntorya commercialisation study.  The full carry for Aminex's share of costs up to US$35 million in respect of its 25% interest implies a potential expenditure during the carry period of up to US$105 million for the aggregate 75% working interest held by Aminex and APT.

APT, as the new operator of the Ruvuma PSA, intends to call an Operating Committee Meeting (OCM) shortly, where it is expected that they will formally present their programme and schedule for the drilling of the Chikumbi-1 well and the 3D seismic acquisition programme.

'We are delighted to finally Complete the Farm-Out and hand over operatorship of the Ruvuma PSA to APT. Aminex and Ndovu stand ready to provide all reasonable assistance to APT to help them in this regard and beyond. We are also extremely grateful to ARA Petroleum for its support over the past 12 months and look forward to the work programme progressing.'