Trillion Energy International has commented on a recent discovery made proximate to its South Akcakoca Sub- Basin ('SASB') gas field , offshore Turkey, the Tuna-1 gas field, which is estimated to be the largest natural gas discovery in the Black Sea to date and potentially one of the largest in Europe in recent history. The new Tuna-1 gas discovery (total depth 3,500 metres) opens new possibilities for exploration of deeper horizons on the SASB gas field. 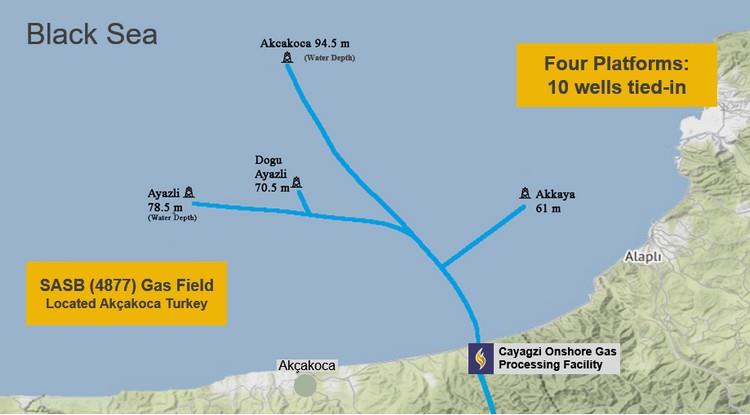 'In light of the recent discovery by our partner TPAO and their proof of massive volumes of natural gas generation from source rocks in the Western Black Sea sedimentary basin the same basin SASB is contained within, we plan to evaluate the geological trends in deeper zones of SASB to identify prospects to drill and test for gas. Seismic has already identified anomalies warranting further assessment where we plan on developing a geological model for potential undiscovered deep gas. Our license rights extend deeper into the SASB Field than what we have ever drilled to date.'

The discovery was made by the Turkish national petroleum company ('TPAO') in the western portion of the Black Sea, and was formally announced by Turkish government officials on August 21, 2020.

The Tuna-1 well was drilled with total well depth planned of 4,525 metres where 100 metres of pay was encountered at a total depth of 3,520 meters. It is expected that an additional 1,000 meters will be drilled to assess two additional structures.

Turkish officials estimated 9 TCF based on the current drilling, with area (250 km2), thickness (500 metres), where log and test results were calculated for 11 TCF of reserves. Turkish officials announced they believe this discovery is a portion of a giant gas field and they will continue to drill to delineate the full extent to the gas field.  Certain media reports cite an expected 26 trillion cubic feet or 800 billion cubic metres gas.

Currently, almost all Turkish gas blocks in the Black Sea are solely owned by TPAO, with the exception of the SASB gas field which is owned 49% by Trillion Energy, with TPAO owning the remaining 51%. Trillion’s SASB gas field license area is approx. 100 km south of the Tuna-1 well.

Historically, US$608 million has been invested to date for the development of the SASB fields, where gas was discovered at about 1,200 metres depth over a decade ago. SASB has currently produced over 41 BCF of natural gas to date.