The future development of Turkey’s giant Tuna-1 gas discovery could save the country up to $21 billion in import costs, Rystad Energy estimates, depending on the field’s peak output, which remains to be determined pending appraisal drilling and further testing. Actual savings could be even higher as global gas prices and import costs are expected to rise in coming years.

The discovery is reported to have an initial gas reserve volume of approximately 320 billion cubic meters (Bcm), but the size of its actual recoverable reserves is still uncertain. As a result, Rystad Energy’s calculations are based on a peak production range of between 2.5 Bcm and 20 Bcm per year. The lower end reflects a more cautious approach, while the higher end a far more bullish outcome.

In any case, a successful development of the field would represent a substantial reduction to the country’s import costs – between $200 million and $1.5 billion per year – based on the field’s breakeven price range and Turkey’s average gas import price for 2020.

'The timing of the discovery could hardly be better, as nearly 40% of Turkey’s contracted import volumes – representing 24 Bcm out of the country’s 59 Bcm per annum imports of pipeline gas and LNG – are set to expire in 2020 and 2021,' says Sindre Knutsson, Rystad Energy’s Vice President Gas Markets.

A successful development of the Tuna-1 discovery could offer Turkey significant natural gas supplies at much more competitive terms, taking effect from the field’s estimated startup date of 2028. Rystad Energy estimates the breakeven price for the field to be between $3.00 and $3.50 per MMBtu, significantly below the cost of imported gas. 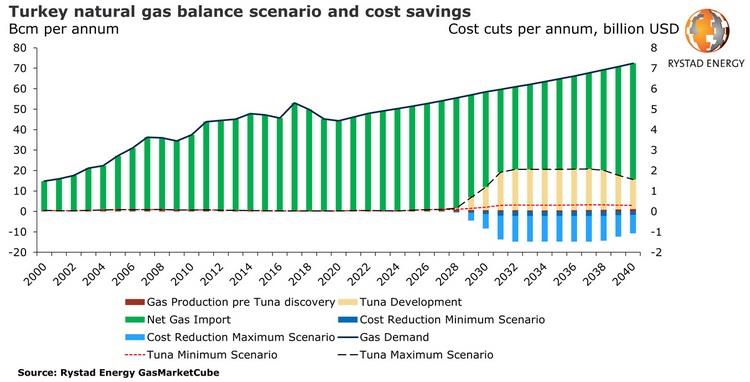 Rystad Energy estimates that the import price for LNG to Turkey in 2020 will average about $4.70 per MMBtu, including both Brent index contracts and spot volumes. We further estimate that the average price of Brent-indexed pipeline imports to Turkey will be about $6.40 per MMBtu this year. The effect of weak Brent prices this year will be seen in the second half of 2020, as Brent-indexed gas prices are normally priced with a lag of three to six months.

We do not expect the volumes from the Tuna-1 field to come online before 2028, but the prospect of a new competitive source of gas, and the confidence that Turkey will be less reliant on imports in the future, will increase the country’s bargaining power in relation to its current suppliers.

Turkish buyers will likely be keen to move away from oil-indexed contracts and instead use a European price benchmark, such as TTF, to which they can index their contracts.

Meanwhile, Turkey’s natural gas demand is set to recover after seeing two consecutive years with falling gas consumption. This development was driven primarily by declining demand from the power sector, where gas been displaced by renewable energy, including hydro, wind and solar. Total natural gas demand declined to 44 Bcm in 2019 after reaching a record of 52 Bcm in 2017.

Rystad Energy forecasts that Turkish demand for gas will rebound to 59 Bcm by 2030 and 71 Bcm by 2040. The two main sectors contributing to this increase are the industrial sector, driven by high economic growth, and the residential sector. Industrial demand is forecast to reach 23 Bcm by 2030, up from 14 Bcm in 2019, and residential demand is expected to climb from 13 Bcm to 17 Bcm over the same period.

Turkey is, for all intents and purposes, entirely reliant on imports at present to meet its natural gas demand, as domestic production stood at only about 0.3 Bcm in 2019, thereby representing less than 1% of domestic demand. Turkey remains heavily dependent on pipeline imports of gas from Russia, Iran and Azerbaijan, which collectively accounted for about 33 Bcm, or 73% of total imports, in 2019.

The growth in the LNG market has, however, allowed Turkey to diversify its supply sources, opening the market to a long list of LNG exporting countries.

Algeria, Nigeria and Qatar all have long-term LNG contracts with Turkey, and the United States has emerged as one of the largest suppliers of LNG to the country over the past two years. Cheap spot prices in the LNG market have made flexible US LNG cargoes attractive for Turkey, replacing supplies from other traditional sources of pipeline gas such as Russia and Iran, both of which have Brent-indexed long-term contracts with the country.

'Turkey’s newfound hope that low-cost discoveries are feasible will no doubt pave the way for further exploration programs. The government seems to have grasped the strategic importance of this breakthrough, as demonstrated by its decision to send no fewer than five war ships to escort the seismic vessel Oruc Reis through the Mediterranean Sea,' Knutsson concludes.