AIM-listed UK Oil & Gas (UKOG) has signed a binding heads of agreement with Aladdin Middle East ('AME'), an independent oil company with 60 years of operational experience in Turkey, to take a 50% non-operated working interest in the 305 sq km Resan Licence. UKOG will take an active technical role in a 5-well oil appraisal and step-out exploration drilling programme, which, Covid and weather permitting, is expected to commence this year.

The Licence lies within the SE Anatolian basin, a geological continuation of the prolific Zagros 'fold-belt' petroleum system within the foothills of the Taurus-Zagros mountains in Iraq, Iran and Turkey, one of the Middle East's major oil producing areas. Multiple producing oil fields lie to the immediate west and south east of the Licence, containing significant proven recoverable reserves. 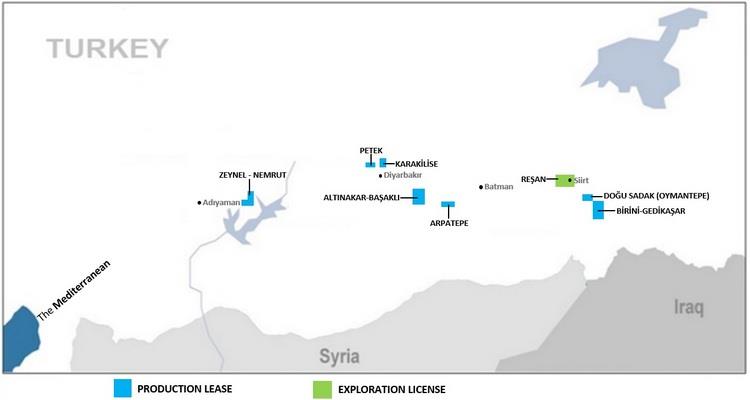 AME's operation's in Turkey - including the Resan Licence (Source: AME)

The Company's and AME's evaluations of the available 1950s and 1960s well and geological data conclude that potentially significant moveable oil within the naturally fractured Mardin has been overlooked by prior operators in both Basur and Resan (i.e. missed oil pay).

An undrilled exploration target in the shallower Garzan limestones, Prospect A, adds further unrisked upside OIP potential of between 68-112 mmbbl in the mean and high case (P10), respectively.

The Basur discovery, made in 1964, whose primary target was the shallow Cretaceous age Garzan reefal limestones, recovered 600 bbl of oil to surface from deeper naturally-fractured and dolomitised Cretaceous Mardin limestones. Core and cuttings contained live oil. Of the oil to surface, 500 bbl were produced over a 6-hour test period, equating to an extrapolated rate of 2,000 barrels of oil per day ('bopd').

Similarly, wells drilled in the 1950s at Resan originally targeted the overlying shallower Garzan but found good oil shows within the Mardin, although short tests were inconclusive. As the Mardin's natural fracture potential was largely unrecognised at the time, it is AME's and the Company's view that the Resan wells were not adequately tested.

Both Basur and Resan were drilled before the potential of naturally fractured Cretaceous limestone oil reservoirs was fully demonstrated by the giant fractured Cretaceous limestone field discoveries made in the same petroleum system within the Kurdistan region of Iraq including Taq Taq, Tawke, Peshkabir. The giant Kurdistan discoveries were made after 2002.

Basur and Resan are also both geological look-alikes to AME's producing East Sadak field, discovered and put on production in 2014, some 20 km to the south east. East Sadak lies directly along the same folded elongated anticlinal (dome shaped) geological feature containing Basur and Resan and produces light 42° API oil from the Mardin limestones, with initial well rates of up to 1,300 bopd.

Based upon East Sadak field performance and geologically similar producing fracture-enhanced oil fields, including those in the Kurdistan region of Iraq, Xodus cite that, in the success case, the percentage of OIP that can reasonably be expected to be recovered to surface over field life will likely range between 10-20%.

The Company believes the occurrence of moveable oil in Basur and Resan has been reasonably demonstrated by prior wells and, therefore, the greatest remaining technical uncertainty is whether the Mardin reservoir can deliver oil at commercial rates and volumes i.e. the usual uncertainty associated with appraisal drilling. Both the Basur-1 well test and East Sadak field performance give confidence in this respect.

Should Basur and Resan prove successful, the Licence therefore offers UKOG the realistic potential of adding significant net recoverable reserves greater than those within its current UK portfolio.

Monetising a successful oil well in Turkey is therefore potentially rapid and largely in the control of the operator, as the completed well can be put on long-term production directly from a flow test and well completion. Permanent production can therefore be accomplished as soon as practicable, taking months rather than the 3-5 years it takes in the UK onshore.

The Turkish petroleum fiscal regime is also amongst the most globally competitive, giving a licensee a post-tax share of production revenues of around 60.5% (inclusive of a 5% withholding tax for repatriated profits to a foreign parent company). The comparable UK post-tax share is 60%.

Turkish petroleum law also guarantees that any domestically produced oil must be accepted by Turkish refineries and purchased at market price. Crude prices are benchmarked to Arab Medium or Arab Heavy, dependent on oil density/API gravity and are approximately equivalent to or marginally higher than Brent crude, the UK benchmark.

Any future oil production is therefore expected to be economically robust at current $40/bbl oil prices as front end capital costs per barrel are relatively low and expected operating costs, derived from those at AME's nearby East Sadak field, are forecast to be comparable with UKOG's Horse Hill field operating costs at around $15/bbl. An equivalent production stream in Turkey will therefore pay back far quicker than in the UK.

As per nearby fields, any future oil production will be exported via road tanker to the nearest oil refinery at Batman, approximately 50 miles (80 km) from the Licence, around half the distance of UKOG's Horse Hill field's export route to Perenco's Hamble facility.

In terms of the likelihood of success, the Company believes the Licence's discovered and "missed pay" opportunities are as good as, if not better than its similar Loxley and Arreton appraisal projects in the UK. Basur has brought oil to surface at good rates and Resan oil shows and electric log data are at a comparable  level of supporting evidence for the presence of moveable oil as the Company's Arreton discovery data.

However, Basur and Resan have the distinct advantage of considerably higher recoverable resource upside, the projected drilling costs are under half those of equivalent wells in the UK and perhaps most importantly, success can be monetised far quicker.

To earn its 50% interest in the Licence, the Company has agreed to fund 100% of the first of 5 commitment wells in the Licence's 5-year exploration term, together with a small 2D seismic survey with an expected cost of $1-$1.5 million. UKOG's net expenditure for the one well plus seismic programme is capped at USD$5 million maximum expenditure. Thereafter, the Company will fund its 50% interest share expected to be c. $1.5 million per well.

The exploration phase expires in June 2023 but can either be extended for a further 2-years, or in the success case converted directly into a 20-year production lease. The Licence's 5 well commitment to the Turkish government has a gross monetary equivalent of $7.66 million (UKOG $3.83 million), however UKOG understands that should any of the commitment wells not be drilled,  a modest penalty of c. $30-50,000 is payable to the government.

The assignment of the 50% interest from AME to UKOG is subject to Turkish governmental approval, which is expected to take around 2 months from submittal of the necessary standard documentation. It is expected that these documents will be submitted over the next few weeks whilst the formal agreements between UKOG and AME are finalised.

There was no attributable profit or loss in relation to the licence interest in the last year as it incurred no exploration expenditure.

Whilst the Company believes that at current oil prices a successful initial programme can likely self-fund further production drilling, it may be necessary at some stage for the Company to raise future working capital to bring the project to fruition.

The first commitment well, currently planned to appraise and flow test the Basur oil discovery, must commence drilling before 27 June 2021. Drilling and seismic are therefore expected to commence before the end of this year, Covid, weather and Turkish governmental transaction approval permitting.

Given the relatively modest well costs, it is expected that a near continuous drilling campaign could be undertaken to ensure the Licence is fully evaluated and that oil recovered to surface can be monetised as rapidly as possible.

AME is a private E&P company that has operated successfully in Turkey for almost sixty years. It  holds 7 production leases and 3 exploration licences in Turkey, with a gross licenced area of around 3,000 km2. AME owns and operates drilling and workover rigs, testing and cementing units, enabling quick and low cost well operations. Headquartered in Wichita Kansas, its operational base is in Ankara, Turkey and is managed by an experienced, predominantly Turkish, team. More information can be found at www.aladdinmiddleeast.com.

'Whilst we remain committed to growing our core UK business, this was an irresistible opportunity to expand our horizons and to expose the company to potentially transformational recoverable oil reserves that can be rapidly monetised.

The quality of the Licence's geological address and opportunity is compelling, the targets being directly on trend with the geological look-alike East Sadak field and located within the same petroleum system as the major oil producing Kurdistan region of Iraq.

The Basur and Resan appraisal opportunities compare well with our Loxley and Arreton projects. However, they offer significantly larger upside potential, are much cheaper to drill and can be monetised far more quickly than any of our UK projects. The overall post-tax share of gross revenues is also marginally better than in the UK.

The low cost of drilling compared to the UK also means that, in the success case, we plan to have a near continuous drilling programme, hopefully commencing this year, Covid and weather permitting. We expect this programme will provide a regular stream of newsflow.

Our new partners, AME, are a proven leading Turkish operator, oil producer and successful Turkish explorer. We will undoubtedly benefit greatly from their unrivalled Turkish knowledge and experience.'