Valeura Energy, the upstream natural gas producer focused on appraising and developing an unconventional gas accumulation play in the Thrace Basin of Turkey, in response to media and market activity, is reporting interim natural gas production test information for Test #1 in the Devepinar-1 well, prior to completion of the flow testing programme.

The Company stimulated three separate intervals covering 125 metres of gross section between 4,640 metres and 4,765 metres, by deploying 41 tonnes, 61 tonnes, and 57 tonnes of proppant, respectively. As very high pressures were recorded at surface immediately after each stimulation, it was necessary to flow each interval for two to three days prior to proceeding to the next operation. The individual flow rates based on the last 24 hour flowing period were 1.6 mmcf/d, 1.3 mmcf/d, and 1.3 mmcf/d from the deepest to the shallowest interval, respectively. All of the recorded flows were up casing, not production tubing, and no artificial lift was used during these flow periods. Each interval was still cleaning up at the end of the flow period as indicated by the final 24 hour rate being higher than the average flowing rate for the period. The gas was dry with no condensate being measured. 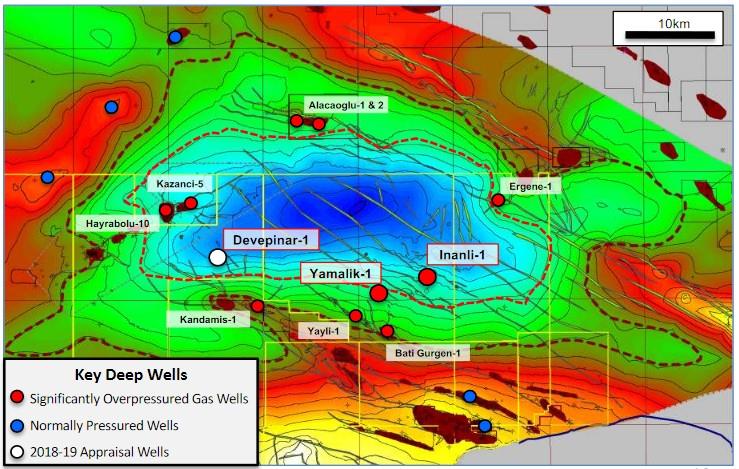 The Company interprets these to be positive results as each of these intervals individually has yielded the best gas flow rates that the Company has recorded from its testing of the BCGA play to date. However, these results are preliminary due to the short duration of each flow period, and the next step will be to proceed with comingled flow of all three intervals to confirm the sustainability of the gas flow and to measure whether any condensate is present.

The plugs between the three stimulated zones have been drilled out and production tubing is now being installed in preparation for the comingled flow test.  The Company does not intend to produce the well at an aggregate of the three individual test rates, but rather intends to production test the well under rate-controlled conditions to measure longer term flow stability. The Company and its partners will make a decision on the next steps in the Devepinar-1 testing programme once this interval has been flowed for a similar duration to the testing of the Inanli-1 intervals.

Flaring is minimised during testing with the majority of produced gas being captured in Valeura’s gas gathering infrastructure and sold to its customers.