The Abu Dhabi National Oil Company (ADNOC) has signed an exploration concession agreement, awarding the exploration rights for Abu Dhabi’s Offshore Block 4 to Cosmo E&P Albahriya, a wholly-owned subsidiary of Japan’s Cosmo Energy Holdings. The award has been approved by Abu Dhabi’s newly formed Supreme Council for Financial and Economic Affairs (SCFEA) and marks the first of such awards endorsed by the SCFEA.

The exploration concession agreement further strengthens Abu Dhabi’s long-standing partnership with Cosmo as well as the UAE-Japan strategic bilateral relationship. The award of Offshore Block 4 follows the recent exploration block awards to Occidental as well as a consortium led by Italy’s Eni and Thailand’s PTTEP, highlighting ADNOC’s ability to continually deliver value in Abu Dhabi’s second competitive block bid round and leverage its strategic partnerships to accelerate the exploration and development of Abu Dhabi’s hydrocarbon resources.

H.E. Dr. Al Jaber said: 'This concession award builds on our long-standing relationship with Cosmo and reinforces the deep-rooted and successful strategic relationship between the UAE and Japan, ADNOC’s largest importer of oil and gas products. We are delighted to extend our partnership with Cosmo, particularly as this award underscores, once more, the important role of energy cooperation in enhancing economic relations between the UAE and Japan as we focus on the post-Covid recovery.

'Cosmo was selected after a very competitive bid round. They bring expertise and understanding of our offshore environment, technology, and market access – key ingredients that underpin ADNOC’s targeted approach to strategic partnerships, which is enabling us to unlock and maximize value from our assets and resources as we continue to deliver on our 2030 strategy.'

Under the terms of the agreement, Cosmo will hold a 100 percent stake in the exploration phase, investing up to $145 million (AED532 million) towards exploration and appraisal drilling, including a participation fee, to explore for and appraise oil and gas opportunities in the block that covers an offshore area of 4,865 sq kms northwest of Abu Dhabi city.

Hiroshi Kiriyama said: “The Government of Abu Dhabi and Cosmo have a strong partnership in the oil and gas sector which we have built for more than half a century. This award represents a significant milestone for us to accelerate our upstream business in Abu Dhabi and further strengthens our seamless and multi-faceted partnership with both Abu Dhabi and ADNOC.

“We are excited to explore this promising block to unlock the hydrocarbon value by leveraging our expertise and experience. We are also certain that our success in this block can be crystallized by creating the synergies with Cosmo group’s existing oilfields and Mubarraz island which are operated by our affiliate, Abu Dhabi Oil Co.'

In addition to drilling exploration and appraisal wells, the exploration phase will see Cosmo leverage and contribute financially and technically to ADNOC’s mega seismic survey, which is acquiring 3D seismic data within the block area. The data already acquired over a large part of the block combined with its proximity to existing oil and gas fields, suggests the concession area has promising potential.

ADNOC launched Abu Dhabi’s second competitive block bid round in 2019, offering a set of major onshore and offshore blocks, on behalf of the Government of Abu Dhabi. Based on existing data from detailed petroleum system studies, seismic surveys, exploration and appraisal wells data, estimates suggest the blocks in this second bid round hold multiple billion barrels of oil and multiple trillion cubic feet of natural gas. 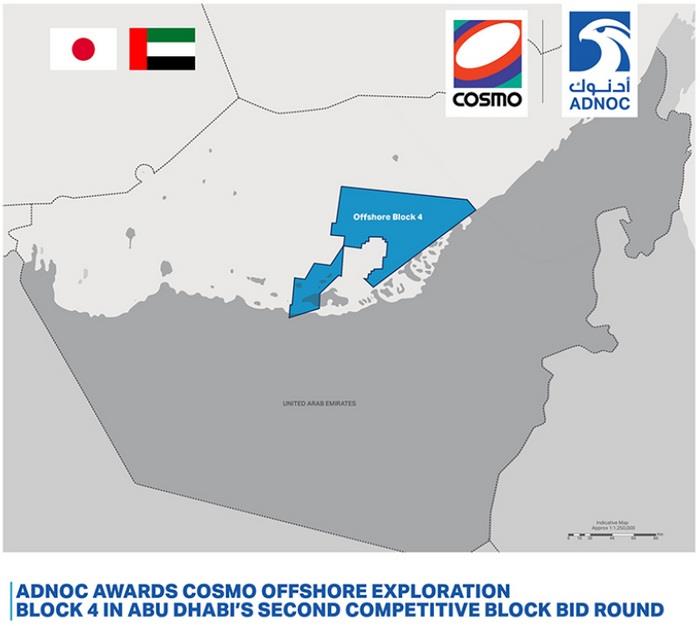 Bilateral economic relations between the UAE and Japan date back to 1961 when the first shipment of UAE crude oil was exported from the Umm Shaif offshore field in Abu Dhabi to Japan. Today,  Japan imports approximately 30% of its crude oil from the UAE.

In January 2020, ADNOC signed an agreement with the Agency for Natural Resources and Energy of Japan for the storage of over 8 million barrels of crude oil at facilities in Japan, extending and expanding the scope of the previous agreement which expired in 2019, the same year ADNOC awarded the exploration rights for Abu Dhabi Onshore Block 4 to Japan’s INPEX Corporation.