Hurricane Energy, the UK based oil and gas company focused on hydrocarbon resources in naturally fractured basement reservoirs, has reported the publication of an updated Competent Person's Report ('CPR') by RPS Energy Consultants. The updated CPR concerns all of the Company's Rona Ridge assets excluding the Lancaster field (licence P.1368 Central), which was covered by a CPR released in May 2017. The new report is available on the Company's website.

Note: Totals above include Whirlwind under the oil case 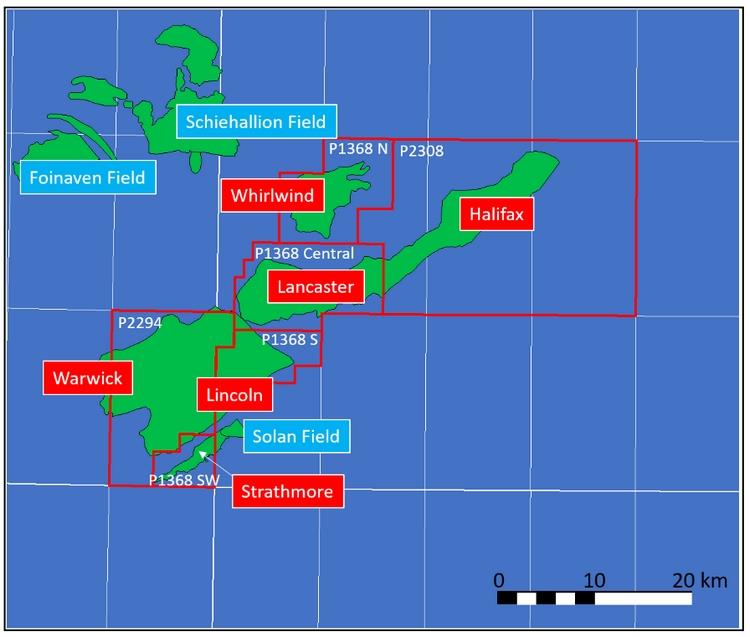 RPS has concluded that the available data indicates that Halifax has similar reservoir properties to Lancaster. Furthermore, Halifax and Lancaster do not appear to exhibit significant differences in their respective oil types and may share a common aquifer. RPS also recognises the possibility that the difference in depth in the oil water contact between Lancaster and Halifax, which is circa 200m, may reasonably be explained by a tilted oil water contact or the presence of intra basement sealing faults. RPS agrees with Hurricane's hypothesis that the most likely reason for the Halifax Drill Stem Test recovering only traces of formation oil to surface is a combination of drilling mud and granite fines that resulted in a thick paste which blocked fractures and made it very difficult for the well to flow.

As with Halifax, RPS considers that Lincoln has similar reservoir properties to Lancaster and that Lincoln and Lancaster exhibit no significant differences in their respective oil types. RPS recognises the Company's view that that the Brynhild Fault Zone separates Lancaster from Lincoln, and that consequently the oil water contact at Lincoln is materially deeper than that established for Lancaster. Whilst RPS also recognises the potential for Lincoln and Warwick to be a single hydrocarbon accumulation, they have elected to take a more conservative approach by evaluating them as separate structures, at least until a well is drilled at Warwick. This approach attributes 2C Contingent Resources of 604 million barrels of oil equivalent to Lincoln alone.

The Company is pleased that RPS supports its geological model for Halifax and Lincoln, and is looking forward to de-risking the contingent resource further in the future, recognizing the wide 1C to 3C resource ranges ascribed by RPS at the current stage of these assets' development. This will include work to confirm reservoir fluid properties, the respective oil water contacts and demonstrable commercial flow from well testing. These technical issues, more fully outlined in the CPR, will need to be resolved as well as the formation of a development plan before an economic limit test can be applied and a monetary value ascribed.

Warwick is undrilled and is therefore the only asset in the CPR which is not assigned Contingent Resources. It is assigned Prospective Resources of 935 million stock tank barrels of oil and assigned a chance of discovery of 77%, given the proximity to the Lincoln discovery and Lancaster field.

Whether they are separate structures or prove to be a single accumulation, Lincoln and Warwick (the "Greater Warwick Area") are comparable in resource potential to Lancaster and Halifax (the "Greater Lancaster Area") with a combined, recoverable resource that could potentially be in the order of 1.5 billion barrels of oil equivalent.

Licences P.1485 and P.1835, which contain the Typhoon and Tempest prospects, have been excluded from this report. The Company intends to relinquish these licences.

Hurricane is committed to maximising shareholder value, and is committed to monetising the vast resource within its portfolio via a farm-out, and ultimately a sale to an industry partner, at the appropriate time.

The Lancaster Early Production System ('EPS') is fully funded and on track for first oil in H1 2019. This first phase of development is designed to provide data to better understand the reservoir characteristics of the basement on the Rona Ridge, whilst providing the Company with substantial cashflow. This CPR has reiterated that Hurricane's other Rona Ridge assets have very similar properties to Lancaster and the EPS is expected to develop the understanding of these discoveries whilst providing capital for the next phase of development. The EPS has given the Company the flexibility to continue to de-risk its assets independently, until such time that it receives an offer from an industry partner that reflects appropriate value for shareholders.

Hurricane's data room remains open. We have been encouraged that certain potential counterparties have expressed a desire to transact across Hurricane's entire Rona Ridge portfolio. However, given the potential capital commitments for a development of the size indicated by this resource upgrade, it is likely that potential partners will wait to see initial results from the Lancaster EPS.

'We are pleased to now have independent validation of our geological model for the Rona Ridge basement play. The Lancaster EPS will go a long way, together with other appraisal work, to narrowing reservoir resource ranges on our assets on the Rona Ridge, following target first production in H1 2019. In addition to providing significant cash flow, the Company believes that a successful EPS will provide a read-across to the production potential of all our basement assets, materially de-risking Lancaster and the surrounding fields at Lincoln, Halifax, Warwick and Whirlwind.'

The Company has published the full CPR on its website. All Reserves and Resources definitions and estimates shown in the report are based on the 2007 SPE/AAPG/WPC/SPEE Petroleum Resource Management System ('PRMS').

The table below is a summary of the discovered in-place volumes and Contingent Resources evaluated by RPS for Hurricane's assets within Licence P.1368 (North, South and Southwest), Licence P.2294 and Licence P.2308. 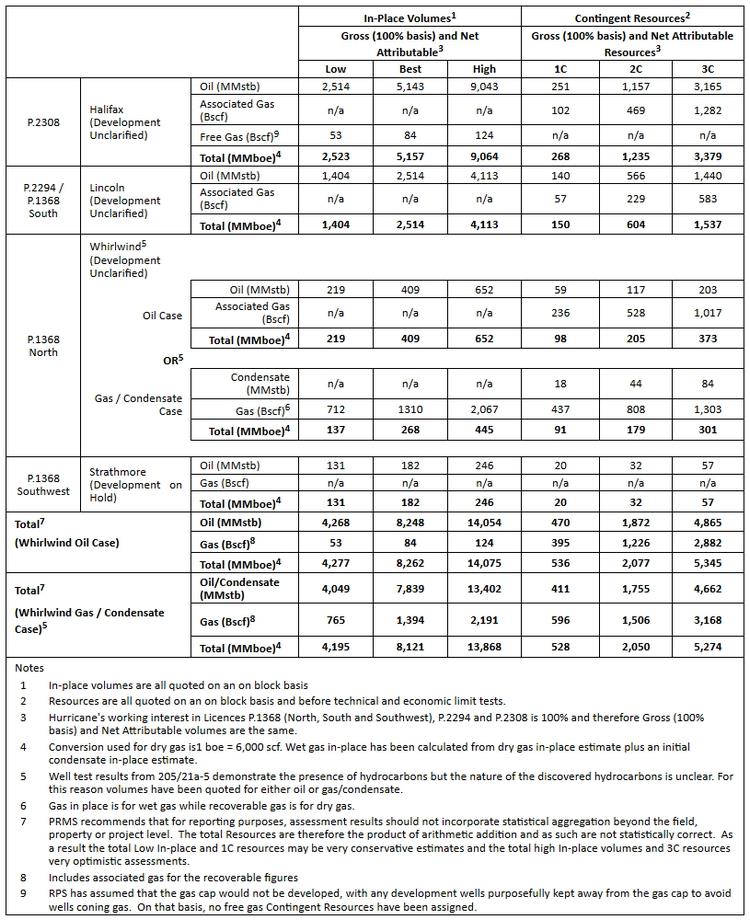 The table below is a summary of the undiscovered in-place volumes and Prospective Resources evaluated by RPS for Hurricane's Warwick prospect, within Licence P.1368 South and Licence P.2294.