UK: New entrant E&P companies are key to the future of the UKCS, but they need to step up investment in new production - Westwood Insight

A new study by Westwood Global Energy Group shows that new entrant E&P companies to the UKCS since 2008 now control 46% of production, 39% of reserves and 64% of potentially commercial volumes yet to be developed.

New entrants are producing over 300 million barrels of oil equivalent per year but their appetite for buying producing assets has not yet been matched by their appetite for investment in new production. New entrants have so far moved only 577 million barrels of reserves into production since 2008, 16% of the total in that time, and they have funded only 16% of exploration drilling.

This is set to change as new entrants hold the key to sustaining UKCS production, controlling over 60% of the 1.7 billion boe of unsanctioned and potentially commercial resources in the UKCS. New entrants are also stepping up exploration efforts and will be funding over 16 net exploration wells in the next two years, 70% of the total planned and a step change from previous levels. 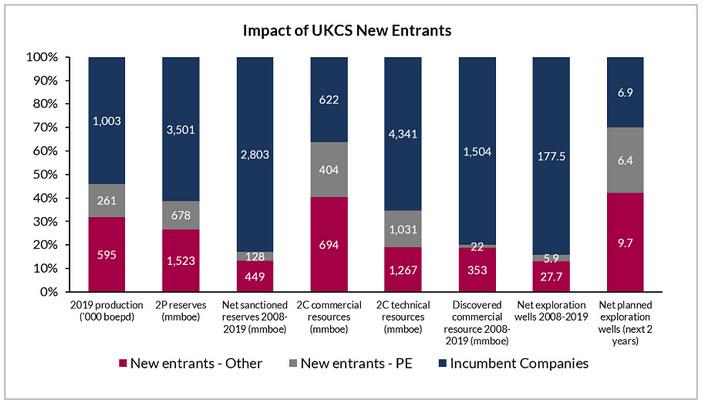 The study found that 170 new companies have entered the UKCS since 2008. 72 remain active but only 31 currently hold reserves and production. 94 of the new entrants were exploration-led, many of them private start-ups, which collectively have only drilled 8.8 net wells finding 33 mmboe of net commercial resource and delivering a commercial success rate of just 15%, compared to the UK average of 27%. The effectiveness of the UK regulatory regime in encouraging so many undercapitalised private companies to acquire exploration acreage is questionable.

New entrants since 2008 have spent US$29 billion in UKCS asset and corporate deals where a consideration has been announced, but successful exits have so far been rare. New entrants have to date sold US$1.1 billion in assets but only three have exited completely for cash with a positive return on investment. A further 12 have exited through a merger.

There have been 23 private equity (PE) backed new entrants who have collectively spent US$11bn acquiring assets with several high-profile deals since 2016. These companies are yet to make a material impact on reserves and production with the exception of Chrysaor. 12 PE-backed companies remain active, controlling 14% of 2019 production and 12% of 2P remaining reserves, of which Chrysaor accounts for c. 70%. These companies have so far sanctioned only 128 mmboe, 4% of the UKCS total, and funded just 3% of exploration wells, finding only 1% of the discovered volume since 2008. Although several of these companies are expected to increase their contribution by investing in developments and exploration, many of them will be looking to exit sooner rather than later.

Reinvestment levels by the E&P sector in the UK offshore fell to below 25% of pre-tax cash flow in 2018. The big deal values grab the headlines, but it is how new entrants balance reinvestment of cashflows from the assets they buy with paying dividends that will determine their lasting impact on the UKCS.