AIM-listed Union Jack Oil, a UK focused onshore hydrocarbon production, development and exploration company, has announced the acquisition of a further 3% of PEDL253 containing the Biscathorpe project and the signing of a legally binding and confidential settlement agreement between Egdon Resources U.K. (acting on behalf of the joint venture partners) and Humber Oil & Gas.  Union Jack advises that the joint parties to PEDL253 have resolved the dispute arising under the Joint Operating Agreement and look forward to co-operating in the future in the development of the licence.

Union Jack has also announced that it has entered into a Sale and Purchase Agreement with Montrose Industries to purchase a further 3% interest in PEDL253 which following the implementation of the terms of the Settlement Agreement, increases the Company`s economic interest to 30%.  The consideration for the additional interest is £115,000 which will be paid from the Company`s existing cash resource.

Upon completion of the Montrose acquisition and implementation of the Settlement Agreement, the interests held in PEDL253 will be as follows: 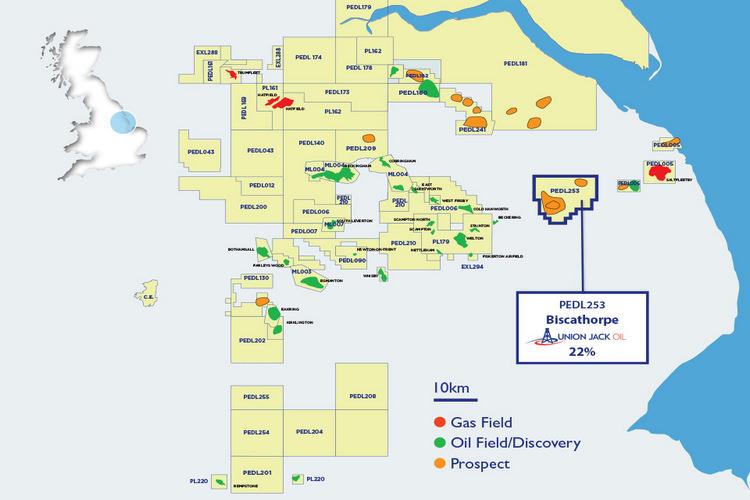 'We are pleased to have been offered this opportunity to increase our interest to 30% in Biscathorpe, where a potentially material and commercially viable hydrocarbon resource remains to be tested.

The collective extensive technical information analysed over the past several months, combined with the APT conclusions on the likely presence of good quality oil have materially upgraded the resource potential and economic value of the project, upholding our opinion that PEDL253 remains one of the UK's largest onshore un-appraised conventional hydrocarbon licences.

Having retained the wellsite, the joint venture has preserved its optionality to pursue a cost-effective side-track to test the resource potential of not only the Basal Westphalian Sandstone play and also to appraise the oil column demonstrated in the deeper Dinantian Carbonate reservoir.

We are pleased that agreement has been reached with Humber, enabling the project now to move forward with full support from all partners.

"We look forward to providing further updates to shareholders as the Biscathorpe project develops.'

Biscathorpe is located within the proven hydrocarbon fairway of the Humber Basin, on-trend with the Saltfleetby gasfield and Keddington oilfield (Union Jack 55%) which produces oil from a Carboniferous Westphalian aged reservoir, the principal target at Biscathorpe.

The PEDL253 Joint Venture partnership has now completed extensive and detailed studies of the Biscathorpe project, including the reprocessing and remapping of 264 sq kms of 3-D seismic. This work has been integrated with the results of the Biscathorpe-2 well, resulting in a significantly enhanced understanding of the prospectivity in the Biscathorpe project area. The results of this extensive exercise concluded that a possible material and commercially viable hydrocarbon resource remains to be tested.

Accessible target areas have been identified where evidence for a thickened Westphalian sandstone reservoir interval is evident on the reprocessed 3-D seismic. These areas can be targeted by a side-track of the existing Biscathorpe-2 well which was suspended once drilling operations were concluded in 2019. The planned side-track will also target the oil column logged in the underlying Dinantian Carbonate in Biscathorpe-2 and as further described below.

The Mean Prospective Resources associated with the Westphalian target area are estimated by the Operator, Egdon Resources plc to be 3.95 million barrels of oil (mmbbls), with an upside case of 6.69 mmbbls. Preliminary economic modelling demonstrates that the Westphalian target is economically robust in the current oil price environment with break-even full-cycle economics estimated at $US18.07 bbl and a gross NPV10 valuation of £55.6 million.

The Westphalian objective was absent at the Biscathorpe-2 well location, however, hydrocarbon shows with background gas and sample fluorescence were observed over the entire interval from the top of the Dinantian to the Total Depth ('TD') of the well (an interval of over 157 metres) with a total of 57 metres interpreted as being oil bearing in the petrophysical analysis.

A geochemical analysis of the gas data and hydrocarbons extracted from drill cuttings was originally commissioned by Union Jack and carried out by Applied Petroleum Technology (UK). The results of this analysis show a hydrocarbon column of 33-34 API gravity oil in the Dinantian Carbonate, comparable with that produced at the nearby Keddington oilfield.

An assessment of the Dinantian oil volumes has also been modelled with volumetric assumptions as being filled to spill and a proven likely live oil column following the results of the APT exercise.

Mean Stock Tank Oil Initially in Place within the Dinantian has been calculated to be 24.3 mmbbls with an upside case of 36 mmbbls.

Although the Dinantian is not considered to be the primary target, should there be effective permeability, or the presence of fractures within this section, there is the possibility of a further commercially viable play being present within the Biscathorpe licence area that would add considerable resource upside over and above the principal Westphalian target.