AIM-listed Union Jack Oil, a UK focused onshore hydrocarbon production, development and exploration company, has announced that it has agreed to acquire a further 12.5% economic interest in PEDL180 and PEDL182 containing the Wressle hydrocarbon development project from Humber Oil & Gas for a cash consideration of £500,000. 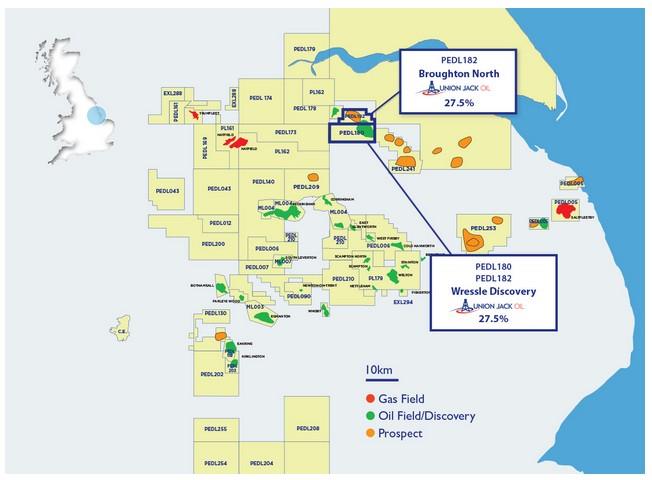 'This Acquisition is important to Union Jack and increases our interest in Wressle, with production anticipated to commence during H2 2020, from 27.5% to a material 40%. The terms of the Acquisition are compelling and this transaction is significantly asset value accretive from the outset, reaffirming Union Jack’s commitment to the development of Wressle and will assist in delivering the Company`s goal to become a mid-tier producer in the medium term.

'The justification for Union Jack acquiring an additional interest in Wressle is our expectation of the transformative economic impact on the Company. We believe that when commercial oil production at Wressle is established, it will provide Union Jack with meaningful cash revenues. After taking operating costs into consideration estimated net revenues are expected to propel Union Jack to a profitable revenue generating oil and gas production company.

'Wressle also possesses several additional upside value drivers, which include, the economic impact of the possible production of gas and electricity sales over and above that used on site and, the additional significant Contingent Resource volumes within the Penistone Flags reservoir'.

Under the Acquisition, the Company has entered into a Sale and Purchase Agreement with Humber, whereby Union Jack, will acquire its 12.5% interest in licences PEDL180 and 182 containing Wressle and the Broughton North Prospect, for a £500,000 consideration with a deferred consideration element payable to Calmar LP, appointeesof Celtique Energie Petroleum (the original vendors in the acquisition by Humber) of £1,040,000 in cash on commercial oil production being established.

The £500,000 consideration payable to Humber will be financed from the Company`s existing cash balance.

Gneiss Energy acted as financial adviser to Humber is respect of this transaction.

In respect of the deferred consideration element of this transaction, the Union Jack Board has initiated discussions with third-party financing providers to evaluate a range of debt financing funding instruments for payment of this aspect of the Acquisition due on commercial oil production being established. Wressle is an attractive, low-cost,low-risk conventional onshore hydrocarbon project under development with 2P Reserves and considerable 2C Contingent Resources present within the Penistone Flags formation.The Board has been advised that a project of this nature with reserves and cash flow lends itself to off-take financing from production and anticipates that it will have the opportunity to choose from such an instrument and a range of other favourable debt structured finance options without recourse to equity-based financing.

Under the Acquisition, the newly acquired interest in PEDL180 is also the subject of a 2.5% Net Profits Interest ('NPI') payable to a third party as a result of the original acquisition by Humber from Celtique. The NPI will only become payable following commercial production at Wressle and after recovery of all costs including, drilling, testing, planning and development. The Effective Date of the Acquisition is 1 March 2020.

Completion of the Acquisition is subject to Oil and Gas Authority approval and certain precedents being satisfied.

On completion of the Acquisition, the tables below show the net volumes of hydrocarbons attributable to Union Jack, pre and post-acquisition.