AIM-listed Union Jack Oil, a UK focused onshore hydrocarbon production, development and exploration company, has announced an update in respect of the West Newton A-1, A-2 and B-1z discovery wells as part of the Extended Well Test ('EWT') programme, accompanied by an updated estimated best estimate in-place oil and gas volumetrics of the Kirkham Abbey reservoir within the West Newton, Ellerby, Spring Hill and Withernsea areas of PEDL183.

The results of the recent EWTs have confirmed that the WNA-1, WNA-2 and WNB-2 wells are substantial hydrocarbon discoveries within the Kirkham Abbey formation.

Gas and light oil/condensate were recovered to surface from both the WNA-2 and WNB-1z wells and multiple samples have been gathered for geochemical analysis which is currently underway.

The large suite of data accumulated during the EWTs, including downhole logs, pressure geochemical and core analysis and VSP (Vertical Seismic Profile) will be used to progress a reservoir modelling study to determine the optimum production design for the Kirkham Abbey reservoir.

Over the coming weeks, a number of external studies will be conducted, encompassing a wide range of potential reservoir stimulation treatments, the results of which could be applied to the West Newton series of wells, in order to achieve optimum flow rates.

The Operator has produced an update of the best estimate (gross) in-place hydrocarbons within the Kirkham Abbey formation at West Newton. In addition, across the 176,000 acre PEDL183 licence area, the Operator has generated best estimate (gross) in-place hydrocarbons over several other material prospects on trend with the West Newton discoveries, and volumetric data for the Ellerby, Spring Hills and Withernsea prospects is also presented below.

In-place hydrocarbon volumes above are Operator data produced by experienced industry professionals but are not to a recognised industry standard. The totals in the table above are shown for guidance only.

'The Operator’s updated analysis of the best estimate in-place hydrocarbon volumes, aggregated across West Newton and the three largest prospects, highlights a significant proportion are liquids.

'In order to unlock the value potential at West Newton and across the PEDL183 licence, over the coming weeks a number of external studies will be conducted, encompassing a wide range of potential reservoir stimulation treatments, the results of which could be applied to the West Newton series of wells in order to achieve optimum flow rates.' 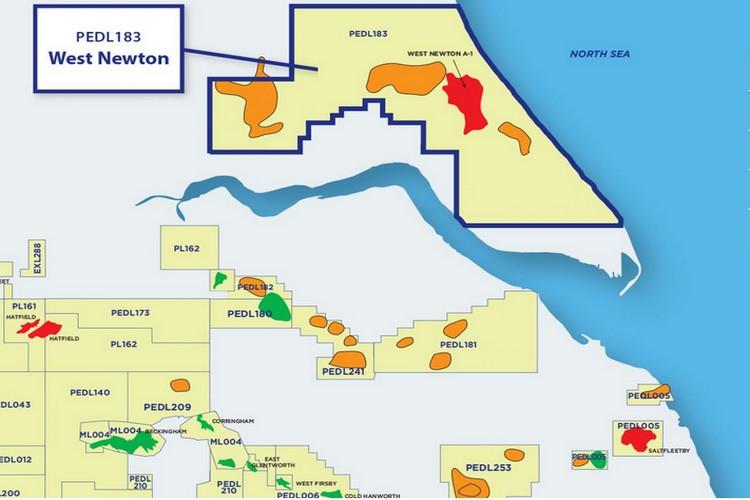 PEDL183 covers an area of 176,000 acres and is situated in East Yorkshire, within the Southern Permian Basin. Union Jack holds a 16.665% interest in this licence, which contains the West Newton A-1, A-2 and B-1z discoveries.