88 Energy has provided an update related to the Umiat oil field, located on the North Slope of Alaska.

As part of the acquisition of the Umiat Unit Leases, Emerald House, wholly-owned subsidiary of 88 Energy, received the Umiat data pack which includes the Umiat 3D seismic data. The Umiat 3D survey abuts the southern edge of the Project Peregrine lease blocks. Previously, only 2 seismic lines-controlled interpretation across the Umiat structure.

Integrating the Linc/Malamute interpretation has provided a better understanding of the Peregrine reservoir geometries to the north as well as enriching our petrophysical database with additional well control (Umiat-8 and Umiat-23H). 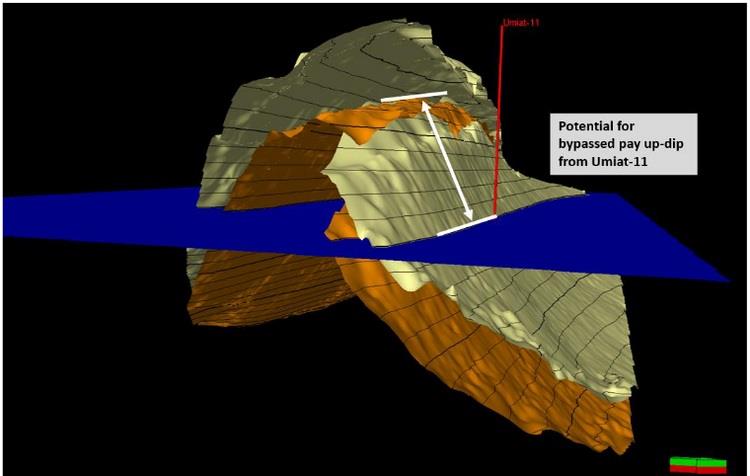 Deferral of Well Commitment by 24 Months

On 4 August 2021, 88 Energy, via its wholly owned subsidiary Emerald House LLC ("Emerald House"), owner of 100% of Umiat oil field leases AA-084141 and AA-081726 ("Umiat Unit Leases"), received notification from the Bureau of Land Management ("BLM") of approval of its request for a 24-month extension to the Year 2 Unit Obligations, and corresponding extensions for the Unit obligations in Years 3, 4 and 5.

Emerald House requested an extension of 24 months to enable the Company to analyse the extensive amount of historical data acquired from the sellers of the Umiat oil field. The 24-month extension to the Year 2 Unit Obligations allows the Company to optimise a full field development plan, which will include evaluating potential synergies with plans associated with the Project Peregrine acreage. It will also enable 88 Energy to use the knowledge gained from drilling the Merlin-1 well to plan an efficient operational program to maximise the chance of success at Umiat.

88 Energy plans to utilise the additional 24 months to:

88 Energy has commenced studies to review the historical Umiat oil field development plans prepared by Linc Energy, which formed the basis of the Ryder Scott 2015 reserves report.  Initial results of the internal review and studies have identified potential cost savings on planned development CAPEX, as well as alternative potential routes to market for the crude which could include a potential tie-in to the Willow oil field development to the north of the acreage.

Over the second half of 2021, the Company will continue to study the historical development plans proposed, as well as consider alternative development options which may also include development in conjunction with the nearby Project Peregrine.

About the Umiat Oil Field

On 8 January 2021, 88 Energy, via its wholly owned subsidiary Emerald House, entered into a Sale and Purchase Agreement with Malamute Energy, Inc and Renaissance Umiat LLC to acquire the Umiat oil field. The consideration for the purchase was a 4% ORRI and assumption of the liability for the abandonment of the Umiat-18 and Umiat-23H wells, drilled by Linc Energy in 2013/2014. The cost to abandon the two wells in April 2021 was approximately US$1m, which will be partially offset by the release and return of US$0.4m in bonds.

Umiat is a known oil field of high quality (38-degree API) crude at shallow depth. It is covered by two leases comprising 17,633 acres, which are in a unit that was formed in September 2019 with an initial 10-year term.

Umiat was discovered in the mid-1940s with 11 appraisal wells drilled by 1953, several of which were tested. Umiat-5 flowed 268 barrels per day on a 3-month test and Umiat-8 had a peak flow rate of 5.9mmcf/d of natural gas during a 4-day test. Minimal operational activity was carried out until 2013/2014 when Linc Energy drilled two wells, Umiat-18 and Umiat-23H. Umiat-23H was tested with a maximum flow rate of 800 barrels per day and a sustained rate of 200 barrels per day.

Substantial engineering and environmental work was subsequently carried out by Linc Energy in support of a potential future development. One of the routes for access to infrastructure runs directly through 88 Energy's Project Icewine leasehold where there are significant independently estimated resources of oil and gas. 88 Energy is undertaking a full field review of the Umiat oil field to determine commercialisation options as a stand-alone development and whether optimisation of the previous development plan is possible. A discovery at Project Peregrine, where future appraisal drilling is planned, would contribute significant value to any development at the Umiat oil field.