88 Energy has provided an update related to results from the Charlie-1 appraisal well, on the North Slope of Alaska.

The final third party petrophysical interpretation from the recently drilled Charlie-1 well are detailed in the table below. These values consider data from logs obtained during drilling using a sophisticated logging suite as well as multiple laboratory analyses of sidewall cores taken from the key horizons in the Charlie-1 well. Encouragingly, the final interpretation provides a significant increase in net pay, compared to the initial interpretation, of 398’ (vs 280’), with the largest contribution coming from the Lima discoveries in the Seabee Formation. These improvements are despite using higher cut-offs for both reservoir and net pay. 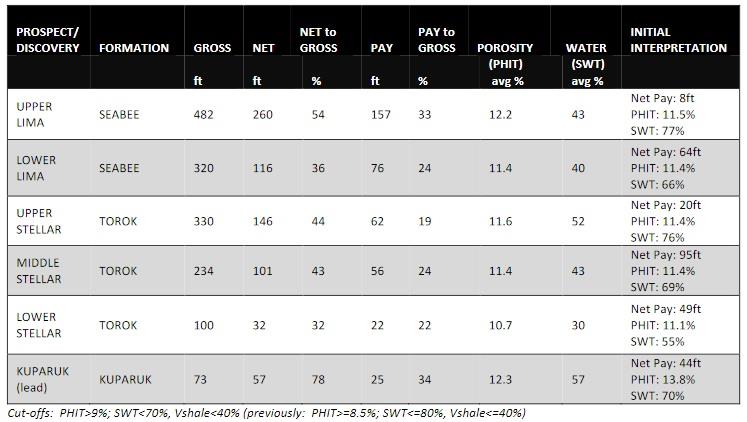 Both Upper and Lower Lima are confirmed as large oil discoveries by this interpretation and the lab results. The results are particularly significant as these targets are the most extensive of the Icewine conventional horizons as well as being relatively shallow, by comparison to the Torok Formation. The extent of the accumulations will be estimated over the coming weeks as these final petrophysical numbers are integrated into the updated seismic inversion product.

Similarly, the Stellar targets in the Torok Formation are also confirmed as hydrocarbon discoveries with good liquid hydrocarbon content. There remains some uncertainty about the gas to oil ratio as the liquid hydrocarbon saturations measured from the Charlie-1 cores in the lab imply much lower gas to oil ratio than that observed during the downhole tests, which recovered gas condensate. It is possible that these liquids may be unlocked by stimulation of the reservoir.

The Kuparuk also remains a prospective target, with anomalously good reservoir quality for its depth, however, no mapping has been done for this horizon and it is considered more gas prone than the Torok Formation.

'The results from the Seabee, despite Charlie-1 not being optimally located, are outstanding. Whilst these may appear as a serendipitous by-product of the well, internal analysis prior to drilling had already significantly high graded this formation; however, it was too late to change the objectives/location of the well meaning that work remained largely on the drawing board. This final interpretation is a strong vindication of that internal effort. We are now looking forward to the conclusion of the evaluation of the Seabee oil discoveries as we integrate the petrophysics into the seismic inversion and subsequent mapping, which will ultimately yield updated volumetrics for our resources that will feed into the Icewine farm-out process.

Good progress continues to be made at the newly acquired Project Peregrine on both the farm-out and permitting/planning fronts. Additional news related to that will be provided to the market in a separate announcement in the near term.

Finally, the confirmation of the ideal thermal maturity for the HRZ shale is encouraging and will form the basis of further work to continue to unlock its large potential.'