As a next step toward meeting President Trump’s direction for increased production of American energy resources and greater energy security for the Nation, U.S. Secretary of the Interior David L. Bernhardt announced the publication of the final environmental impact statement (EIS) for a new National Petroleum Reserve in Alaska (NPR-A) Integrated Activity Plan (IAP). The National Petroleum Reserve is the largest area of federally managed land in the United States and is estimated to hold 8.7 billion barrels of recoverable oil and 25 trillion feet of recoverable natural gas. It serves a critical role in both American energy dominance and national security future. 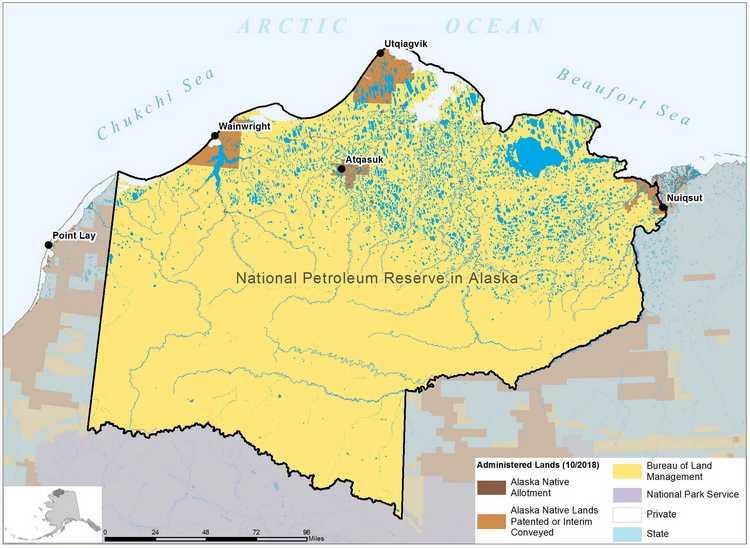 'President Trump has committed to expand access to our Nation's great energy potential,' said Secretary Bernhardt. 'Today's action is one more significant step in the process of delivering on his promise.'

Originally called Naval Petroleum Reserve No. 4, the area was set aside for its potential petroleum value by President Warren G. Harding in 1923. The 1976 Naval Petroleum Reserves Production Act designated the roughly 23-million-acre area specifically for oil and gas development, renamed it the NPR-A, and transferred administration from the Navy to the BLM.

The new IAP/EIS analyzes management goals and objectives for the reserve that take an environmentally responsible approach to leasing and development, respect traditional uses of the land, and maintain access to subsistence resources. It identifies new management alternatives that examine different land allocation combinations that increase opportunities for oil and gas leasing. These include new and revised lease stipulations and required operating procedures to protect important resource values, as well as modifications to areas set aside for special management considerations.

Along with a 75-day public comment period, public meetings were held in Anaktuvuk Pass, Anchorage, Atqasuk, Fairbanks, Nuiqsut, Point Lay, Utqiagvik, and Wainwright, Alaska, to afford the public an opportunity to provide input on the process. Public hearings on subsistence activities were held in conjunction with the public meetings in the potentially affected communities of Anaktuvuk Pass, Atqasuk, Nuiqsut, Utqiagvik, Point Lay, and Wainwright.

Public comments on the Draft EIS alternatives drove significant changes to required operating procedures and lease stipulations that were used to develop a new and preferred alternative (Alternative E). Alternative E would allow for 18.6 million acres, or 82% of NPR-A’s subsurface estate, to be open to oil and gas leasing. This would increase the area open to leasing by about 7 million acres.

Under the new preferred alternative, over 4 million acres are closed to leasing including the previously closed Kasegaluk Lagoon and Peard Bay Special Areas. The Teshekpuk Lake Special Area would be protected by no surface occupancy (NSO) stipulations and timing limitations mitigating impacts on caribou calving and important bird habitats. The geographic boundary and associated protections of the Teshekpuk Lake Special Area would also be adjusted to account for changing calving distribution of the Teshekpuk Caribou Herd. Additional stipulations would ensure adequate ramps and pullouts on roads are required in future development proposals to facilitate subsistence hunting. In addition, important rivers include large set back areas extending miles in some places and protections for their free flow and water quality.

'We’ve looked to open up some additional areas to leasing based on new information while also using management prescriptions to protect important wildlife, habitat, and subsistence uses,' said BLM Alaska State Director Chad Padgett. 'The BLM worked with state, local, tribal, and private sector stakeholders to propose management prescriptions that achieve a balance between conservation stewardship, being a good neighbor, and responsibly developing our natural resources to boost local and national economies.'

The IAP/EIS includes special measures to address concerns and interests of the communities of Wainwright, Atqasuk, Nuiqsut, and Utqiagvik including leasing deferral areas, setback along important subsistence rivers, flexibility for potential community infrastructure projects, and special management for split estate lands where occupancy stipulations can be waived by the land owner. The IAP/EIS is responsive to the State of Alaska and North Slope Borough requests asking for more investment in infrastructure and to help build capacity to support their aligned goal.

The BLM initiated the EIS in November 2018 to develop a new management strategy for all BLM-managed public lands in the NPR-A as directed in Secretary’s Order 3352, which envisions responsible development of our Nation’s vast energy resources in the NPR-A while reducing regulatory burdens that unnecessarily encumber energy production, constrain economic growth, and prevent job creation.

The Secretary’s Order responded to President Trump’s Executive Order 13783, on Promoting Energy Independence and Economic Growth, which tasked the Department to review its existing regulations that potentially burden the development or use of domestically produced energy resources and appropriately suspend, revise, or rescind those that unduly burden the development of domestic energy resources beyond the degree necessary to protect the public interest.

The BLM will next prepare a Record of Decision, which may be published no earlier than 30 days after the official Notice of Availability for the EIS is published in the Federal Register.

Source: U.S. Department of the Interior - Bureau of Land Management