Pantheon Resources, the AIM-quoted oil and gas exploration company with working interests of 89.2% - 100% in certain projects located adjacent to transportation and pipeline infrastructure on the Alaska North Slope, has provided the following update:

Pantheon has announced the successful acquisition of a 100% interest in approx. 66,000 acres in the State of Alaska's North Slope Areawide Lease Sale. The new leases are strategically positioned in two areas contiguous to our current acreage on our northwestern, western, and eastern boundaries. Pantheon's acreage now totals approx. 160,000 contiguous acres.

Pantheon had a competitive advantage in bidding for this acreage given it owns over 600,000 acres of proprietary 3D seismic covering the entire area, which is not available to any 3rd parties. These lease additions are a direct result of detailed technical work completed by Pantheon and its consultants at eSeis over the past year, including comprehensive Hi-Tech Geophysical evaluation of the area. Management believe the new acreage offers significant potential for the Company.

Pantheon bid a cumulative amount of $3.27million and was required to deposit 20% of this at the time of the Lease Sale. The remainder of the bonus bids will be due when the leases are issued following title work by the State. The addition of this contiguous acreage west, north west and east of our Talitha Unit increases Pantheon's control of the Talitha play and also increases its control over the Theta West project which is emerging as a project of great potential for the Company.

Pantheon has been undertaking a resource assessment of the downdip Shelf Margin Deltaic (SMD) formation at its Talitha project. The Talitha project contains four independent geological horizons, each with different reservoir trap geometries, qualities and risk profiles. All four of these formations were penetrated by the Pipeline State #1 wellbore on the Company's acreage and all were confirmed as oil bearing. Today's lease acquisitions included acreage affecting  the resource potential across these zones including the resource potential of the SMD horizon controlled by the Company which in turn will be assessed during the drilling of Talitha #A.  The updip portion of this zone was the subject of the Independent Expert Report by Lee Keeling and Associates (LKA). This updip section is estimated to have a NPV10 of over $9/bbl at current strip prices. 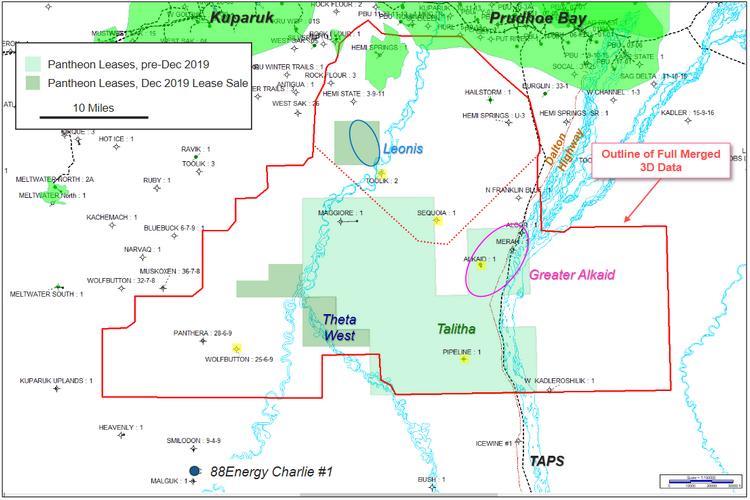 'Acquiring these leases was a very successful outcome for Pantheon. Our team has spent close to a decade working this acreage, enhanced recently with advanced geophysical evaluation which was only available to Pantheon because of its proprietary 3D seismic over that area. The downdip SMD is also significant for the company, adding resource potential and value.'

'The geological plays identified by Pantheon are stratigraphic Brookian & Kuparuk targets, based on known oil in three wells. We are particularly excited that we have substantially extended our acreage position in our new Brookian play called Theta West. Our understanding of the Theta West project has advanced considerably over the past 12 months and is emerging into a project of outstanding potential.'

'I'm pleased to add significant resource potential to our portfolio with the successful acquisition of this acreage. The geographic location contiguous to our current acreage and in close proximity to the export infrastructure were important considerations. I look forward to working with the State of Alaska on these leases. In addition to the Theta West acreage acquisitions, the downdip SMD extends across our acreage onto the eastern blocks just added, which abut the Dalton Highway giving us the potential for year round activity. Overall a great day for the Company.'