Total has announced the final investment decision (FID) to develop the Anchor oil field. Additionally, front-end engineering and design (FEED) has begun for the North Platte discovery. Both projects are located in the deepwater U.S. Gulf of Mexico, off the coast of Louisiana.

Total holds a working interest of 37.14% in Anchor, alongside operator Chevron (62.86%).  The Anchor field will be developed with seven subsea wells connected to a semi-submersible floating production unit (FPU) with a capacity of 75,000 barrels of crude oil and 28 million cubic feet of gas per day. First oil is expected in 2024.

Anchor will be the first development to use the high-pressure 20,000-pounds-per-square-inch (20 kpsi) technologies developed at industry level over the last few years.

Total also holds interests with Chevron in other leases in the vicinity of Anchor with exploration potential. Any discoveries on those jointly owned leases could be tied back to the Anchor facilities at competitive costs.

The North Platte field straddles four blocks of the Garden Banks area, 275 kmss off the coast of Louisiana in approx. 1,300 meters of water. The reservoir is of high quality, both in porosity and permeability, with thickness in places exceeding 1,200 meters.

Like Anchor, North Platte requires the use of 20 kpsi technologies. The field development plan is based on eight subsea wells and two subsea drilling bases connected via two production loops to a newbuild, lightweight floating production unit (FPU). Production will be exported through existing oil and gas subsea networks.

Total operates North Platte with a 60% working interest, alongside Equinor (40%). Oil production at plateau level is expected to average 75,000 barrels per day. Output will include associated gas. Total also holds interests in high-potential exploration acreage in the Greater North Platte Area, and the FPU design provides for a possible future tie-in. 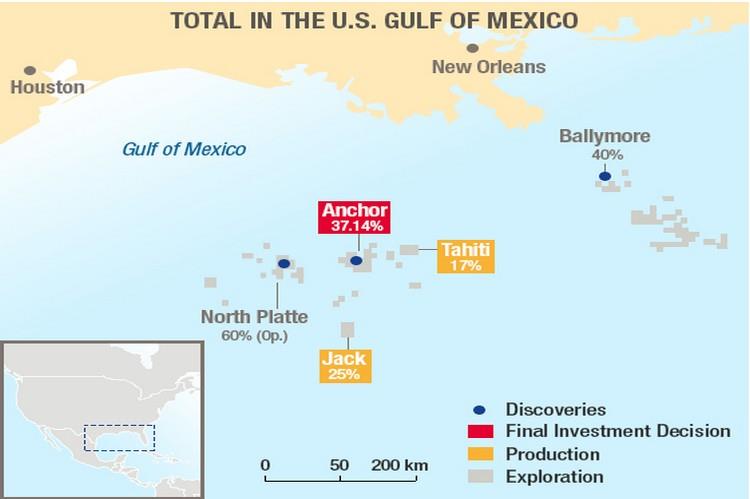 Total moves forward on two deepwater projects in the U.S. Gulf of Mexico

'The FID for Anchor and the decision to launch FEED for North Platte are tangible examples of our strategy to increase our footprint in the deepwater Gulf of Mexico. The Anchor project benefits from reserves with upsides, allowing for a stand-alone development at a competitive cost. The North Platte project, meanwhile, marks Total’s return to the region as an operator. We’re aiming for a final investment decision in 2021,' stated Arnaud Breuillac, President, Exploration & Production at Total. 'These two high-pressure, 20 kpsi projects will help to unlock the potential of the Central Area of the Gulf of Mexico, where Total has a strong presence.'