Oil production from the US lower 48 states, excluding Gulf of Mexico, peaked at 9.2 million barrels per day in August following back-to-back increases since June. This climb has helped push the nationwide total above 11 million bpd and is likely to keep it above that mark for the rest of the year, according to Rystad Energy estimates.

A gradual decline in L48 output may nevertheless set in from September as onshore drilling remains below the level required to maintain production in nearly all US oil basins, despite a robust fracking exercise where operators are bringing on line their inventory of drilled but uncompleted (DUC) wells. Rystad Energy projects US onshore production to start rising again in the second half of 2021.

Preliminary well production data for July has already been reported for almost all the major oil and gas producing states. After recovering by around 540,000 bpd in June, oil volumes for the lower 48 states excluding GoM seemingly posted a second monthly increase of more than 400,000 bpd in July. We estimate another rise of 230,000 bpd in August from the same regions, which would take the total for the month to a peak of 9.2 million bpd.

Production from the Gulf of Mexico and Alaska gained by 160,000 to 170,000 bpd in July. There is a high likelihood that the nationwide total surpassed 11 million bpd in that month and it will potentially stay above that level through the remainder of the year. Based on updated July data, US dry gas production increased by about 550 million cubic feet per day between June and July and is expected to average around 90 billion cubic feet per day in the second half of the year. 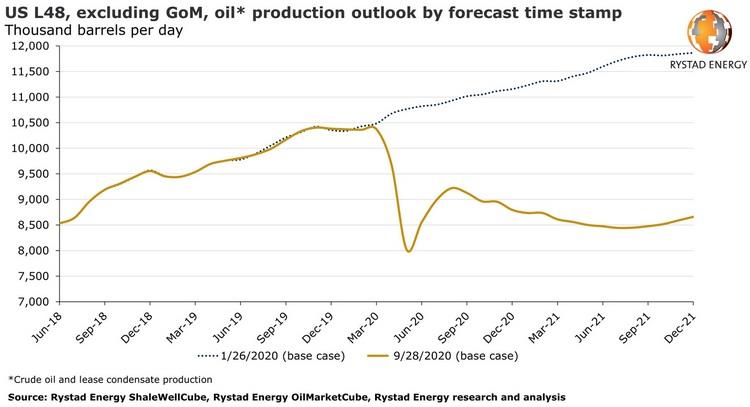 Frac activity rebounded sharply in July, driven by the Permian Basin. After holding stable in August, the industry delivered another sequential increase in September. We currently estimate that about 650 frac operations were started in September. Operators are bringing their DUC completions forward, taking advantage of low oilfield services costs in the spot market, as the WTI strip rose to the mid-$40s per barrel range a few weeks ago.

Oil production in the Williston Basin – North Dakota and Montana combined – increased by 170,000 bpd in July, raising the basin total to almost 1.1 million bpd. Most shut-ins were restored by the end of July, though select wells will exhibit full production potential only in August data.

Texas oil production increased by 125,000 bpd and New Mexico added 60,000 bpd in July. The recovery in July was not limited to the Permian Basin, with south Texas’s Eagle Ford also making a significant contribution as curtailed volumes were reactivated. Thousands of stripper wells in Texas remained inactive as of July, but these wells account only for a marginal share of the statewide total.

Each major state in the Rockies – Colorado, Wyoming and Utah – posted production increases, with the total from the three increasing by 25,000 to 30,000 bpd in July. Pennsylvanian gas production posted a gain of about 600 MMcfd in July, but total dry gas output from some of the core gas regions, such as Appalachia, Louisiana, the rest of Texas, still saw a sequential decline as regions outside of Pennsylvania remained in decline, according to our analysis. Oil production from Alaska rose by 80,000 bpd and by 85,000 bpd in the Gulf of Mexico in July.

“We still anticipate US oil output to average at 10.82 million bpd in 2021. A gradual decline is expected in the first half of the year, followed by a recovery in the fourth quarter. The outlook for the lower 48 states, excluding Gulf of Mexico, has been revised up by 90,000 bpd for the second half of next year, as we start hearing about modest increases in the oil rig count before the end of this year,“ says Rystad Energy’s Head of Shale Research Artem Abramov.

This uptick will be limited to a handful of producers without a significant DUC inventory size. Most producers with a large number of DUCs plan to increase rig activity only in the first half of next year to allow for a smooth transition from a DUC-supported completion program to a normal operations mode.

We have revised our dry gas production forecast for 2021 up by 500 MMcfd, with the most significant contribution coming from a more resilient base decline in gas basins. In the Appalachia region there are still significant numbers of older wells that produce at restricted rates, and these wells might make a positive contribution of up to 600–700 MMcfd to base production in the next three to four quarters.

Even with additional supply of 500 MMcfd in 2021 compared to the previous outlook, the US domestic gas market is still heading toward a structural supply deficit, with the possibility of stronger domestic gas prices if the global gas market recovers further.