US: Vineyard Wind 1 becomes the first commercial scale offshore wind farm in the US to achieve financial close

AT $2.3B, THE PROJECT REPRESENTS ONE OF THE LARGEST INVESTMENTS IN A SINGLE RENEWABLE ENERGY PROJECT IN THE UNITED STATES

Vineyard Wind, a joint venture between Avangrid Renewables, a subsidiary of AVANGRID, and Copenhagen Infrastructure Partners (CIP), have announced that the company’s first project has achieved financial close.  Working with nine international and U.S. based banks, $2.3 billion of senior debt has been raised to finance the construction of the project.  The milestone enables Vineyard Wind to provide a notice to proceed to its contractors in the coming days and weeks, allowing suppliers to start hiring, training and mobilizing people to prepare for both on and offshore construction.  Onshore work will begin this Fall in Barnstable, with offshore work commencing in 2022.  The first power from Vineyard Wind 1 will be delivered to the grid in 2023.

'There have been many milestones passed over the last several months, from securing the final federal permits to signing the U.S.’s first offshore wind project labor agreement,' said Vineyard Wind CEO Lars T. Pedersen.  'Achieving financial close is the most important of all milestones because today we finally move from talking about offshore wind to delivering offshore wind at scale in the U.S.  With the signing of these agreements, we now have everything in place to start construction, launching an industry that will immediately start to create jobs and make a significant contribution to meet Massachusetts’ carbon pollution reduction targets.  We couldn’t have made it this far without the tremendous support we’ve received from local residents, elected officials at every level of government and so many others.  We can’t thank you enough and look forward to working together for many years to come.'

'Today’s milestone demonstrates the financial community’s confidence in Vineyard Wind 1 and AVANGRID’s sustainability strategy, and more broadly, the U.S. offshore wind industry,' said Dennis V. Arriola, CEO of AVANGRID.  'We are proud to pioneer this new industry and demonstrate that offshore wind can be a sound investment, while creating jobs, combating climate change and powering the economies of our coastal communities.'

'We’ve long believed in the financial viability of this project, and today’s announcement is an absolute confirmation of that outlook,' said Christian T. Skakkebæk, a Senior Partner and Co-founder of CIP.  'Together with our contractors and suppliers, we can now move forward with construction and start creating the first of many offshore wind jobs in the U.S.  There is potential here for tremendous growth and investment, both in the industry and the supply chain.  I’ve no doubt that this important milestone is just the beginning.'

'Santander is extremely proud of our advisory capabilities in Renewable Energy, in particular Off-Shore wind, and appreciate the opportunity to advise Avangrid and CIP in this landmark transaction that is so critical to Massachusetts and US climate goals,' said Marco Antonio Achón, head of Santander Corporate & Investment Banking US.

Vineyard Wind 1 is an 800 MW project located 15 miles off the coast of Martha’s Vineyard and will be the first commercial scale offshore wind project in the United States.  The project will generate electricity for more than 400,000 homes and businesses in the Commonwealth of Massachusetts, save ratepayers $1.4 billion over the first 20 years of operation and is expected to reduce carbon emissions by more than 1.6 million tons per year. 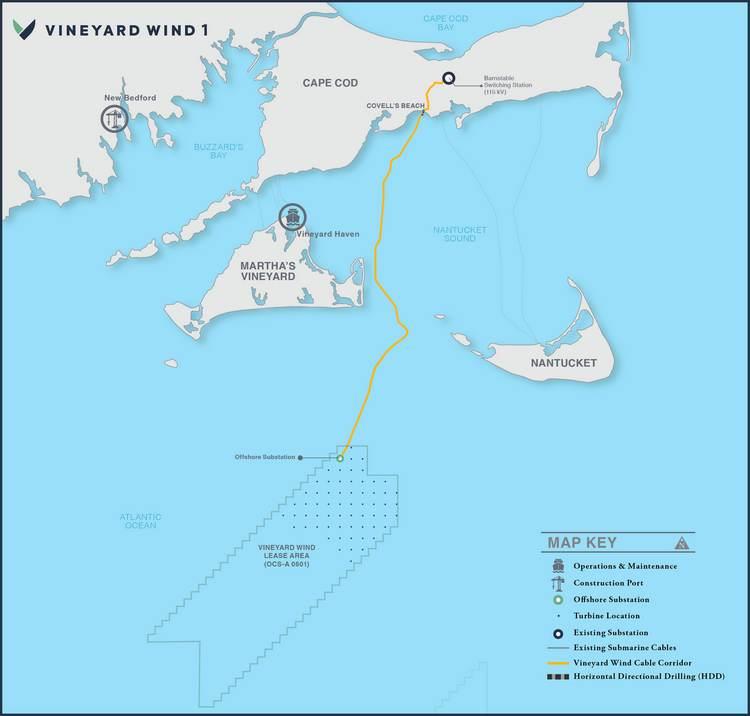 Vineyard Wind is an offshore wind development company that will build the first commercial scale offshore wind energy project in the U.S., to be located 15 miles south of Martha’s Vineyard. Vineyard Wind, based in New Bedford, Massachusetts, is 50 percent owned by funds of Copenhagen Infrastructure Partners (CIP) and 50 percent by Avangrid Renewables, a subsidiary of AVANGRID.