Predator Oil & Gas, the Jersey based Oil and Gas Company with near-term gas operations focussed on Morocco, has announced an update on the drilling of the MOU-2 well in the Guercif Petroleum Agreement onshore Morocco.

The MOU-2 well has been suspended with an option to re-enter after reaching a depth of 1,260 metres Measured Depth.

Wireline logs were acquired from the 95/8" casing point at 677 metres to 1,010 metres Measured Depth. The wireline logging tools were not able to log deeper than this depth due the presence of extremely sticky clays in a geological formation overlying the Moulouya Fan primary objective. Photographs of the logging tools covered in the formation mud have been uploaded to the Company's website at www.predatoroilandgas.com.

Below the logged interval a gross interval of 165 metres was penetrated with up to 100 metres of variable quality sand. A strip log through this interval has been uploaded to www.predatoroilandgas.com. Presence of significant thicknesses of sands demonstrate the potential sand source area feeding the Moulouya Fan below the debris flow.

This geological formation is interpreted to be a slumped basin margin debris-flow which has not been encountered in previous drilling in the area. The clays are particularly under-compacted and sticky due to very rapid deposition within the debris-flow. The interval presented a drilling challenge with very low rates of penetration.

Presence of significant thicknesses of sands in the debris-flow demonstrate the potential sand source area feeding the Moulouya Fan as mapped pre-drill.

Above the depth at which the well was suspended a detached transported block of the Moulouya Fan target may have been penetrated. A gross interval of 28 metres was estimated on the basis of the well site cutting samples and lithological log. 16 metres of potential reservoir was interpreted from drilling breaks. This can only be confirmed by wireline logging.

At 1260 metres Measured Depth a decision to suspend the well was taken as rates of penetration had dropped to below 1 meter/hour.

The mud programme and its compatibility with the previously not seen sand-rich geological formation represented by the debris-flow will require re-evaluation to achieve a more cost effective rate of penetration.

The debris flow potentially forms a highly effective seal on the underlying Moulouya Fan. The thickness of the Moulouya Fan reservoir interval is expected to increase between MOU-1 and MOU-2 based on the sand content of the debris-flow penetrated in MOU-2 allowed an extrapolation across to MOU-1 to be made.

As a result of this the MOU-1 perforating and testing programme will be more focussed and extensive in the principal zone of interest to determine potential connectivity with the seismically defined area of the Moulouya Fan between MOU-1 and MOU-2 that is interpreted as potentially gas-bearing.

A re-entry and deepening of MOU-2 will be fully evaluated once a solution to optimising the drilling mud programme and mud properties has been completed.

The Moulouya Fan target has not been reached yet in MOU-2 as a consequence of the requirement to re-evaluate the drilling programme through the unexpected geological formation encountered in the well.

Until that re-evaluation is complete and a decision to re-enter MOU-2 has been taken pre-drill objectives remain unchanged as do potential estimates of gas resources.

The MOU-1 testing programme is being progressed and revised to gather as much information as possible on connectivity of potential gas sands over a wide area. 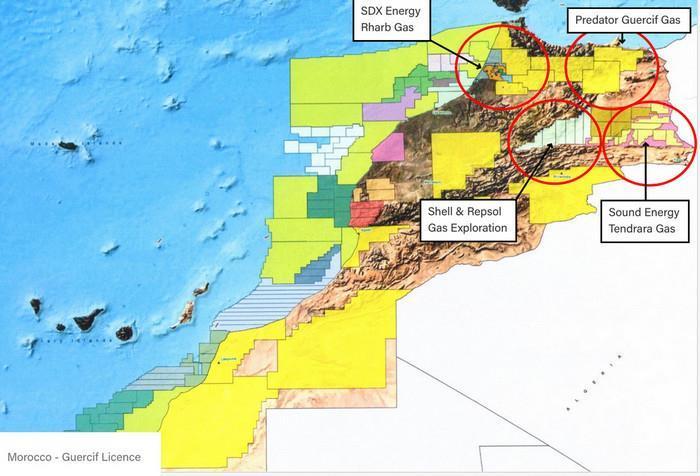 'MOU-2 has been an extremely challenging well to drill due to the presence of a particular geological formation not previously encountered.

The prudent and safer option was to suspend the well and leave it in a state to re-enter once a better understanding of the mud programme required to drill this particularly complex interval efficiently and cost-effectively.

Whilst this is not the result we wanted the pre-drill objectives and potential resources remain unchanged.

The Star Valley rig will remain in place over the well head.'